The World Economic Forum (WEF) has pulled out all the stops this year. Little did you realize that 2022 was your last traditional Christmas, because the WEF says you must give up those Christmas traditions in the coming years. Why? To preserve the environment, of course.

The WEF wants carbon-neutral celebrations, and it is your duty to comply. After all, we need global cooperation. And to make sure there is global compliance, the WEF wants international policy that requires governments to eliminate Christmas traditions. And, they’re ordering the mainstream media to start spewing that message. (Interesting that WEF is pushing for so many international policies, like the pandemic treaty, which we wrote about earlier here.)

What are these nefarious Christmas culprits? Traveling to see relatives, presents (egads!) and Christmas trees for starters.   The large amount of food we eat, because you know, it’s a celebration. For example, the WEF mouthpiece, The Guardian, recently described gift giving and traditional Christmas meals as “vulgar”. They said these things need to stop.

Given these culprits, the WEF says Christmas must be abolished. The usual fact checkers are coming out and saying, “No, no, no. The WEF is not trying to abolish Christmas. But they are. Their own social media says so. 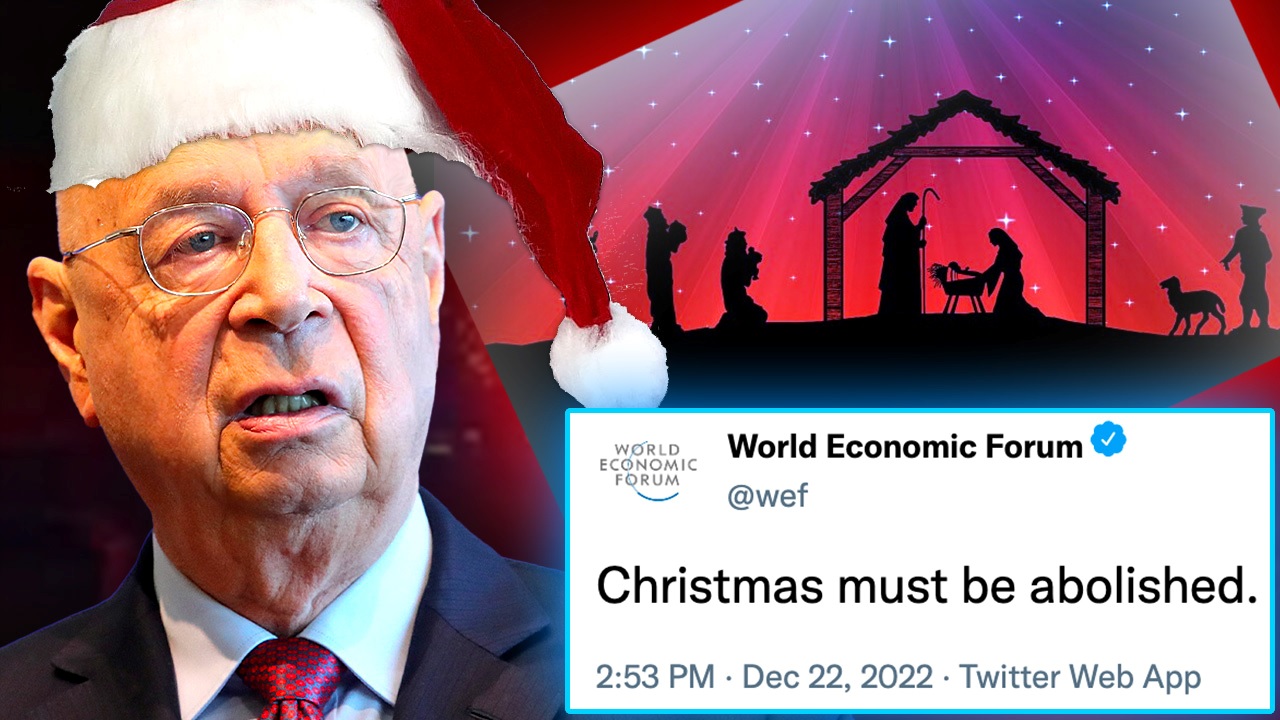 The narrative has changed in the last two years. In 2020, the narrative went up a notch, letting people know about the large carbon footprint that Christmas imposes on us all. In 2020, the WEF was still allowing us to have trees, but they wanted you to buy a tree that you could plant and use year after year. If you did get a cut tree, they wanted you to recycle it. All reasonable.

Now WEF has the gloves off, and is trying to cancel Christmas forever. They want you to replace your turkey with more carbon-neutral crickets, bugs and other insects, or you could opt for Bill Gates’ fake meat. They’re trying the same guilt trip used for COVID; with the pandemic, the message was to not kill grandma. With Christmas, the message is “cancel it for the future of your children.”

Is it really about climate, or is it entirely something else? Over the years, the WEF has become increasingly hostile toward Christianity and therefore Christians. Keep in mind, these are the same goons who say that humans do not have a soul, Jesus is fake news and God is dead. They want to create a one world religion to unite all of humanity around climate science. In their world, Christmas has no place.

Your pets have no place on Earth either. You can forget that cute Christmas pet stocking next year because the WEF doesn’t even want you to have a pet. Their new initiative from earlier in 2022 stated that eliminating pet ownership would reduce the global carbon footprint.

Naturally, there was tremendous backlash, and that is when all the fact checkers like Snopes and others came out to say, “No, no, no, the WEF isn’t telling you to kill your pet.” But they are. Their own social media says so. 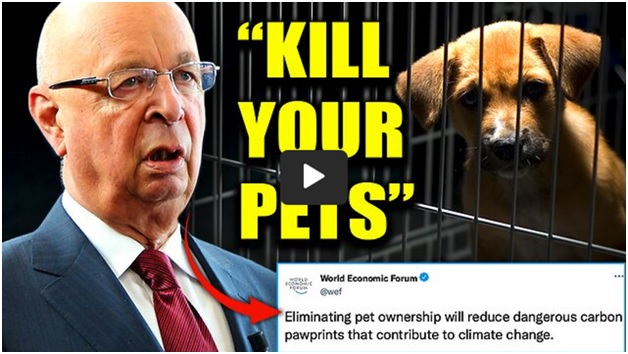 Your pet’s sin is that they eat meat (a.k.a. dog and cat food) so naturally, they must all be slaughtered! Once again, they want to usher in an international policy (sound familiar?) to require most pet owners to euthanize their animals.

And once again, the mainstream media does the bidding of the WEF. Outlets like CNN and others are trying to convince you that your carnivorous chihuahua’s heavy meat-based diet is causing planet warming on a global scale. Little Fluffy is farting too much and releasing dangerous gases into our atmosphere. The WEF adds insult to injury, trying to convince us that mass pet euthanasia will reduce animal cruelty. What? They really think we are THAT stupid. We have celebrities telling us to let our pets die to fight inflation, and to eat our pets to combat climate change. If you happen to be one of the peasants who is allowed to keep your dog, Fluffy will eat bugs – just like you.

Naturally, there has been tremendous backlash, but the WEF doesn’t care because they are zealots about reducing global warming and will use any means necessary to do so.

But let’s be realistic, none of the WEF policies are really about climate. They are about dehumanization. They are about “crushing the human soul”, as one WEF insider admitted. The WEF wants to take away all of the joys in life that interfere with their agenda for you to own nothing and be happy. Christmas will be eliminated, and your beloved pets, who bring you incredible joy like mine do for me, will be gone as well.

They’re truly out of their minds. Humanity has never faced such a serious adversary.

Fed Up Texas Chick is a contributing writer for The Tenpenny Report. She’s a rocket scientist turned writer, having worked in the space program for many years. She is a seasoned medical writer and researcher who is fighting for medical freedom for all of us through her work.