In Part 2, I explored Bill Gates’ role in Nigeria with monkeypox and began hinting to some monkeying around. Here is the conclusion of my 3 part series.

On May 21st, two days after the Portuguese researchers presented their first draft, Andrew Rambaut from the University of Edinburgh started a discussion on the ongoing MPXV genome sequencing. But strangely the page was scrubbed.

During the discussion, Andrew predicted that “all or most of these mutations arose in a single round of replication.” He also suspected that the mutations occurred in a reservoir host, such as a rodent.

Back in February 2022, Virologica Sinica published a study titled “Combined Insertion of Basic and Non-basic Amino Acids at Hemaglutinin Cleavage Site of Highly Pathogenic H7N9 Virus Promotes Replication and Pathogenicity in Chickens and Mice.” It appears this monkeypox contains a similar style of research to H7N9.

“We characterized the reconstituted viruses in terms of viral replication in avian and mammalian cells, thermostability and acid stability, cleavage efficiency, the virulence in mice, and pathogenicity and transmissibility in chickens,” outlined the study. They also noted that “the H7N9 variant caused a 35 percent mortality rate in mice, with researchers noting that certain amino acids ‘increased the pathogenicity.’”

Meanwhile, both the BMJ study and the Portuguese researchers outlined that the current outbreak was most closely related to viruses “associated with the exportation of monkeypox virus from Nigeria to several countries in 2018 and 2019, namely the United Kingdom, Israel, and Singapore.”

By the way, Tedros acknowledged that “the sudden appearance of monkeypox in many countries at the same time suggests there may have been undetected transmission for some time.”

Since the early days in Nigeria, the current virus has seemingly changed. Again.

Look at the table below: 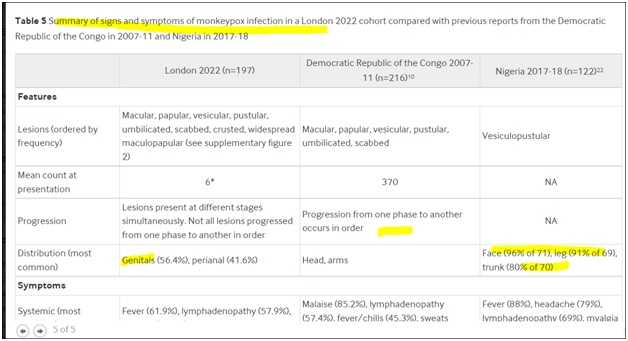 What is disturbing is that there have been 47 mutations from those 2018-2019 viruses which the authors say “is far more than one would expect, considering the estimated substitution rate for Orthopoxviruses.”

Normally, in these types of viruses, there are 1-2 nucleotide changes per year. In a Naked Emperor’s Substack titled Was the Current Monkeypox Strain Engineered in a Lab?, the author mentions a person named Jikky who noted that as well as the mutation, there has been a deletion which could indicate that serial passaging through a cell line has taken place.

I located a study that looked at the genetic variability, including gene duplication and deletion, in early sequences from the 2022 European monkeypox outbreak. The study stated:  “We should NOT be complacent regarding the current outbreak, based on the prior history of MPXV. The [monkeypox] we have known for the last 64 years may not resemble near-future human MPXV.” Some researchers flagged the methods, stating they were used for potentially creating a “contagious pathogen.”Jikky concluded that given the mutations in such a short space of time, this version “could only happen by taking a lab strain of monkeypox and then passaging it through cells in the presence of a mutagen.”

Bioweapons expert Dr. Frances Boyle agrees: “It’s obvious that monkeypox is a biological warfare weapon with gain-of-function properties, which is why it’s so infectious.”

Do you really think this new pandemic is random versus planned? What is the true purpose of using gain-of-function with monkeypox? To help further the culling of humanity? To scare us from touching each other and things in order to bring in a cashless society? To justify more lockdowns in time for the elections? To hide side effects of the jab? All of it? And was Nigeria used as a testing ground for what was to come?

“Of all the diseases that have tormented mankind, smallpox has left the oldest and the deepest scars. After incubating QUIETLY for five to 10 days, the virus manifests suddenly,” writes Ken Alibek in his book BioHazard.

Read the book for yourself or watch the BBC film titled Silent Weapon: Smallpox and Biological Warfare, based on his story.

Smallpox, which is related to monkeypox (also referred to as the Variola virus (VARV)), killed millions around the world every year before it was eradicated in 1980. Smallpox is estimated to have killed up to 90 percent of Indigenous people in the Americas in the centuries following European arrival. Monkeypox is nowhere near lethal.

The truth is; smallpox with a 30 percent fatality rate, has also  been turned into a bioweapon. The Soviet Union, where Ukraine now exists, houses labs that have altered smallpox through Gain of Function measures.

So what happens when you use a smallpox vaccine for monkeypox? Does anyone care that even Fauci admitted years ago that the smallpox vaccine is toxic, and that in 2002, Sixty Minutes stated that scientists called the original smallpox vaccine, first created in 1776, “the most dangerous vaccine known to man?”

(Visit the Tenpenny Research Library for a deep dive into smallpox.)

Do you recall when Big Pharma and the media whores started suggesting people mix and match different COVID-19 injections? Well, now they are suggesting that we use the smallpox vaccine for monkeypox since they haven’t manufactured a monkeypox shot yet.

Dumping older stockpiles into human subjects is nothing new. For instance, it’s common for pharmaceuticals to rename a problematic vaccine in their “Strategic National Stockpile” and introduce it in another country. Abra Abra Cadabra, I want to reach out and jab ya. The irony is that the Medical Cartel gets to use smallpox ‘off label’ but persecutes Ivermectin for use in COVID-19.

The Daily Mail stated millions of Monkeypox vaccines were unused and destroyed, and that US National Stockpile dwindled down to 1000s because health agencies believed smallpox was the next vector and they had plenty of that jab made. Less than a decade ago, the United States had some 20 million doses of a new smallpox vaccine — also effective against monkeypox — sitting in freezers. 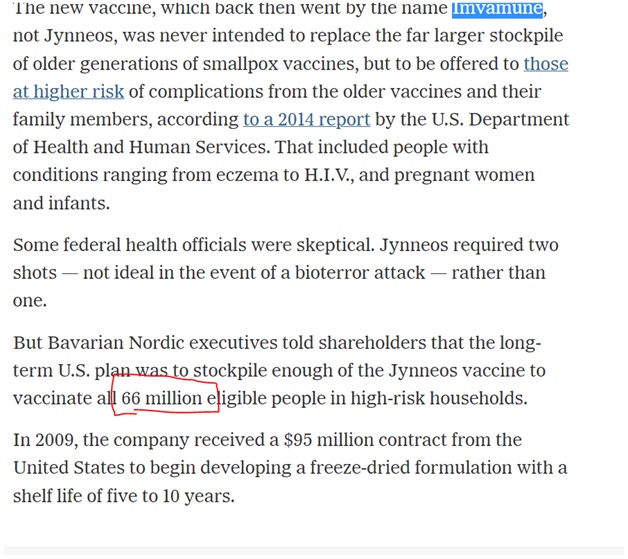 Denmark was the first place smallpox was cultivated.

In the interim, there are so-called ‘smallpox therapeutics.” For instance,  Brincidofovir, which may work in a “lethal monkeypox virus animal model.”  In September 2021, the U.S. Food and Drug Administration approved tecovirimat (TPOXX), which is used to treat herpes, as a “successful step forward in smallpox preparedness.

However, because orthopoxviruses can become resistant to treatment, they add that a multi-therapeutic approach is necessary.

In November 2021, Bill Gates began seeding the narrative. He theorized about what would unfold “…if a bioterrorist brought smallpox to 10 airports?”

According to Dr. Mercola, the NIH identified monkeypox as a potential bioterrorism agent.

Just like CoronaCon, an entire industry is materializing as part of the World Economic Forum’s Grave Reset. They’re creating hysteria and manufacturing demand for a smallpox vaccine with about 85 percent effectiveness in “preventing monkeypox,” according to our reliable friends at The Johns Hopkins Center for Health Security.

And now on August 4th, after certain states like New York and cities like San Francisco declared a state of emergency, HHS Secretary Xavier Becerra declared monkeypox a public health emergency in the entire United States.

“This time it will get your attention.” We think they are Crying Wolf, and in part they sure are, but what if they are using a silent weapon to run more experiments? Consider that on May 11, 1987, The London Times reported that the W.H.O. gave 50 million laced smallpox vaccines that “triggered” the AIDS virus.