by Maryam Henein, founder of HoneyColony and Vaxxter contributor

In Part 1 of this two-part interview with Robert Kennedy Jr, we discussed COVID testing and RFKJr’s journey from an environmental lawyer to an advocate for vaccine-injured children and all of humanity. Find Part 1 here.

Hail to Corona. Democracy under this virus has been waived. We are told “do this” under the guise of safety when it’s truly under the heavy-handed reign of Scientism.

“Can Fauci present America with risk assessments and science on social distancing, masks or lockdowns,” asks Mr. Kennedy. “He’s a virologist, not an economist.”

In May 2020, The New England Journal of Medicine had this to say about social-distancing and masks (emphasis added):

“We know that wearing a mask outside health care facilities offers little if any, protection from infection. Public health authorities define a significant exposure to COVID-19 as face-to-face contact within six feet with a patient with symptomatic COVID-19 that is sustained for at least a few minutes (and some say more than 10 minutes or even 30 minutes). The chance of catching COVID-19 from a passing interaction in a public space is therefore minimal. In many cases, the desire for widespread masking is a reflexive reaction to anxiety over the pandemic.”

Meanwhile, a 2015 study found cloth masks, when compared to surgical masks, increase the rate of influenza-like illnesses by 13 times! Cloth masks are probably best avoided and should not be reused without properly sanitizing them.

Regular surgical masks are not much better. The COVID-19 virus is 0.125 µm in size. Surgical masks have been shown to not adequately filter against aerosols measuring from 0.9-3.1 µm. Other researchers have shown that particles from 0.04-0.2 µm can penetrate surgical masks.

“A face cloth mask is essentially the same as trying to stop mosquitoes with a chainlink fence,” says Mr. Kennedy.

Many of us don’t remember any country being put into lockdown or introducing social-distancing in a bad flu year or because of tuberculosis.

Dr. Knut Wittkowski, former Head of Biostatistics, Epidemiology, and Research Design at Rockefeller University’s Center for Clinical and Translational Science supports the idea of exposing a population to a virus to induce community-based, natural herd immunity. Interviewed by The Press and The Public Project in April 2020, he stated (emphasis added):

“With all respiratory diseases, the only thing that stops the [spread of] disease is herd immunity. About 80 percent of the people need to have had contact with the virus, and the majority of them won’t even have recognized that they were infected, or they had very, very mild symptoms, especially if they are children. So, it’s very important to keep the schools open and kids mingling to spread the virus to get herd immunity as fast as possible…”

The evidence makes it clear to me that we’re being manipulated. Dr. Vernon Coleman, MD, of the United Kingdom noted back in March, as highlighted in James Perloff’s book COVID-19 and the Agendas to Come, Red-Pilled:

“The panic and the hysteria are wildly overblown. There really isn’t any need to stop all non-urgent operations and there’s no need to close shops and cafes and put people out of work, which is what’s going to happen; the economies all around the world are going to be in a terrible state. Loads of people are going to lose their jobs, and when people lose their jobs, then the death rate goes up; there’s a well-known correlation between unemployment and death rates.”

By the end of May, more than 40 million Americas had filed unemployment claims since mid-March. Calls to suicide hotlines were up 600 percent, and liquor sales 300 to 600 percent, according to a May,2020 letter sent to President Trump by more than 500 doctors, urging him to end the lockdown, which they called a “mass casualty incident.”

We were told it would take two weeks of lockdown to flatten the curve, but in reality, the lockdowns have caused exponentially more harm than the coronavirus. As Trump has said, the ‘cure’ – masks, distancing, tracing, shutdowns, terrorizing children, dividing families – is must worse than the disease.

Does Fauci care about our health?

“For Fauci, pandemic planning is about selling vaccines. As part of this goal, he spent money on ‘weird’ Gain of Function (GOF) studies,” says Kennedy.

In 2019, the National Institutes of Health, with backing from the National Institute of Allergy and Infectious Diseases (NIAID), committed to spending $3.7 million over the course of six years for research, some of which was the gain of function variety. This came on top of a different $3.7 million, a five-year project that involved collecting bat coronaviruses and studying them. The first program funded virologist Shi Zheng-Li and other researchers at the Wuhan Lab and came to a close last year.

Retired U.S. Army Reserve Col. Lawrence Sellin (Ret.) penned an article calling for a full investigation into NIAID, its leader Anthony Fauci, and the communist Chinese regime, as it appears the three conspired to unleash the Wuhan coronavirus (COVID-19) into the world. Writing for the Citizens Commission on National Security (CCNS), Sellin presents a compilation of evidence to suggest that Fauci played a key role in not only exposing the world to the p*andemic but also in getting it funded through large, taxpayer-funded grants given by his department to the controversial Wuhan Institute of Virology (WIV).

During Fauci’s career, which has spanned six presidencies and 36 years, there is no shortage of ethics and patient safety controversies, as well as numerous citations for violating contract “time” and “amount” rules and the Anti-Deficiency Act, a federal law.

“An accurate accounting of the countless deaths, widespread disease and community destruction, damage to the national and state economies, societal collapse and citywide devastation, bankrupted businesses and ruined families, etc. is simply too long to list here,” writes The Millennium Report. “Nevertheless, when the damage is finally assessed, few individuals on the national stage will be found as culpable as Dr. Anthony Stephen Fauci.”

What Happened To The Democratic Party?  It was a priceless question recently asked by someone who always referred to herself as a life-long democrat…until she realized that those who make up the party are no longer reasonable and have arguably lost their souls to Big Pharma.

In a nutshell, says Kennedy, campaign finance laws were overturned by Buckley vs Valeo and when  Reagan won, he signed the National Vaccine Injury Compensation Program NCVICP into law in 1986.

“Democrats have long positioned themselves in a knee-jerk posture of protecting those agencies from Republican insults,” explains Mr. Kennedy. “Democrats aligned with people who worked in government agencies, who were on our side regarding guns, children’s health, abortion, etc. And then, as Republicans slowly hollowed out those agencies and made them sock puppets for industry, Democrats did not recognize that process.”

“He’s an industry representative, not a regulator. And then when Obama was in power, the democrats made a deal with pharma and said, ‘Ok, if we get Obama Care through, we will make it so we cannot negotiate drug prices with you. We’ll pay whatever it is that you want.’ That’s how the Democrats got Big Pharma on board to push Obama Care. That was the first time democrats started taking pharmaceutical money. Unlike the Republicans, [up until then] they did not take money from the industry, they only took money from labor unions and trial lawyers.”

When we spoke on September 20, Ruth Bader Ginsburg had just passed away. Mr. Kennedy wrote a eulogy on Instagram touting the supreme court justice as a medical freedom champion for her dissent in the Bruesewitz v. Wyeth decision in 2011.

Hannah Bruesewitz, the daughter of the main petitioners in the case, received Wyeth’s Tri-Immunol DTP vaccine as part of childhood immunizations. The Bruesewitzes claimed that Hannah’s seizures and later developmental problems came from the vaccine. They filed suit in the “Vaccine Court,” a special court within the United States Court of Federal Claims. Their petition was dismissed for failure to prove a link between the vaccine and Hannah’s health problems.

The Court, in a 6-2 opinion by Justice Antonin Scalia, held that the “plaintiffs design defect claims [were] expressly preempted by the Vaccine Act.” The decision by the Court affirmed that vaccine manufacturers are not liable for vaccine-induced injury or death if they are “accompanied by proper directions and warnings.”

Justices Sonia Sotomayor and Ginsburg said that Scalia’s opinion caused “considerable violence to the statutory texts, misconstrued the legislative history and drew all the wrong conclusions” from the 1986 Vaccine Injury Compensation Act. 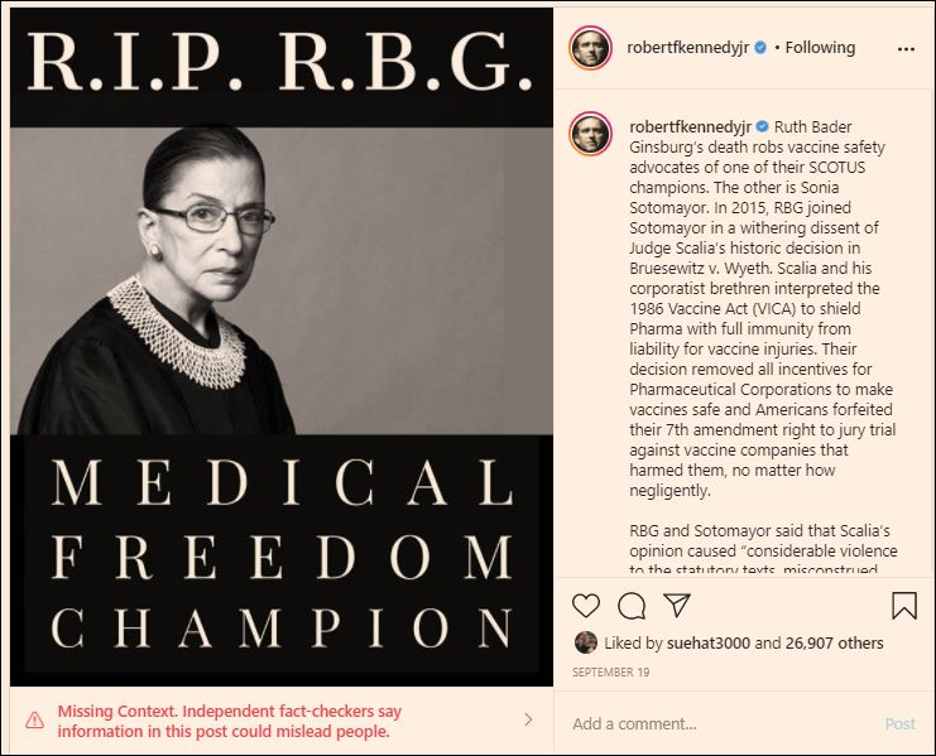 It’s not very common for those in office to stand firm against Big Pharma or vaccine manufacturers. Consider that in 2016, when Trump ran for president, he openly stated that vaccines might be linked to autism. Shortly thereafter, the pharmaceutical industry helped craft the democratic narrative, adds Bobby that “This is anti-science. They purported that this comment was like the ‘rest of his anti-intellectual stuff and his rhetoric as a climate-denier.’”

Recognizing the Pandemic was Planned

COVID-19, at peak lethality, imposed a 0.26% death rate. Today on the heels of an election, many of us, including Bobby Kennedy, Jr. realize that this manufactured pandemic being used to finalize a true Orwellian, authoritarian and totalitarian society that rewards corruption, censorship, oppression, collusion and eliminates our liberties and right to bodily autonomy.

We must resist the international agenda that is being imposed on the citizens of the world, an agenda which includes legalized spying, restriction of travel and local mobility, mandatory vaccination, expansion of 5G, and the transition to a digital, cashless society.

Maryam Henein is a Canadian-born investigative journalist, activist, functional medicine consultant, filmmaker and founder of HoneyColony. She directed the documentary Vanishing of the Bees narrated by Ellen Page Early life and education. Follow her on Twitter @maryamhenein and youtube.com/maryamheneinbeelady