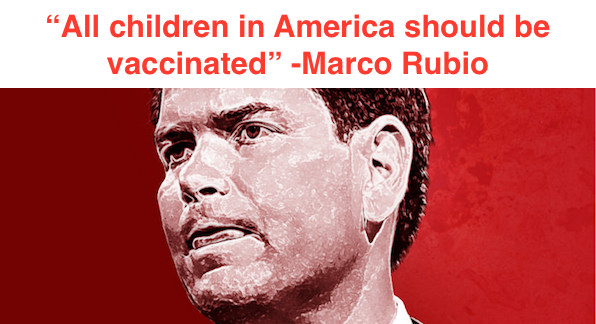 And that’s not all you should know……

You can take Sen. Marco Rubio (R-Fla.) off your list if vaccination legislation means anything to you and your family, because he has made it abundantly clear that he is for vaccines. He now stands in stark contrast to Rand Paul and Donald Trump in terms of how he’d approach legislation over the matter. He’s made it quite clear that he believes in herd immunity and that unvaccinated populations of children put the entire herd at risk.

“There is absolutely no medical science or data whatsoever that links those vaccinations to onset of autism or anything of that nature,” he said. “And by the way, if enough people are not vaccinated, you put at risk infants that are three months of age or younger and have not yet been vaccinated, and you put at risk immune-suppressed children that are not able to get those vaccinations.”

The CDC is currently reporting 102 measles cases in the United States, which is fueling politicians such as Rubio to jump on the vaccination bandwagon seeing he remains an outsider for getting the nomination. This places Rubio in deeply and defined contrasting position to the other Republican candidates. His belief that parents “absolutely” should vaccinate translates into a step in the wrong direction for parents who either don’t believe in vaccinations, or wish to retain their human right to choose whether or not their children are vaccinated. With the nomination nearing, choosing a side in this issue is definitely a political play that many politicians are going to make. Rubio’s last ditch effort, however, is a scary premonition as although he’s remains an outsider, he is still in contention for the spot.

Chris Christie, another potential Republican nominee, feels that parents should retain “some measure of choice.” Trump has stated that he believes the vaccination schedule is too dense and that he believes there is some connection between autism and vaccines. Ben Carson is for vaccines and would probably move to force them on us. These are definitely times to pay attention to what these politicians are saying as the nomination nears.