Bastardizing God’s glorious human design is nothing new. Ever since directing the 2010 award-winning documentary film Vanishing of the Bees, my message has been about the poisons in our environment. So when I noticed that there seemed to be a rapidly growing population of transgenders, I wondered if toxins might play a role in transgenderism. Back in 2018, I wrote the following email to ComFood, a food politics email discussion list. Theoretically, the group was dedicated to “all” aspects of community food systems and beyond. Certainly, they were no strangers to the concept of poisons in our environment, right? Wrong.

“I am an investigative journalist, and functional medicine coach, best known for directing the documentary film Vanishing of the Bees. I am outlining a theory/writing a piece about the burgeoning rate of transgenders. I suspect this has to do with the crazy amounts of estrogen mimickers, endocrine disruptors, soy, toxin synergy, etc. in our environment. I am looking for EXPERTS when it comes to these toxins.

This is NOT a piece about ethics or shaming.

If you study the food supply and you realize ‘food is thy medicine’ and that we are living in an increasingly toxic world where frogs are born as hermaphrodites, then yes it’s VERY possible that similar effects are happening to humans.”

According to ComFood, I had committed a thought crime. And even though “Cancel Culture” wasn’t yet a thing, I was shamed and told I was being a “brackish bigot.”

“In asking to get connected to ‘experts,’ you’re being transphobic and are basically asking the listserv to support you in reducing people’s lived experience and identity to a question of ‘were they poisoned into being trans?’ which is profoundly offensive.”

“As food professionals, I assure you we are aware of the way that our environment impacts us, and even more so how our fellow humans impact each other. I would urge that before you begin this effort, you deeply interrogate your reasoning behind wanting to draw the larger trans and gender expansive community into your piece. Especially if you are trying to claim that environmental conditions can cause a physically ‘incorrect’ expression of gender identity (and therefore, that the ‘right’ environmental conditions can also cause the ‘correct’ expression of gender identity), which is a dangerous assertion for many folks in the LGBTQIA+ community.”

“Unfortunately, this theory/report comes across as misinformed about trans experiences. I urge you to learn more about the trans and non-binary community near you, or connected to your medical field first. There are plenty of professionals around the country if you’d like to talk about trans health and medical needs. I suggest checking out your nearest LGBTQ health center to see what resources and investigative journalism would positively support and benefit the trans community.”

Like many other things, I was on the front lines of what was to come. And now that I think about it, it’s kind of ironic that the narrator of my bee film, Ellen Page, has since surgically removed her small breasts and transitioned into Elliot. While there were indeed those on the ComFood mailing list who encouraged me, they did so privately. Needless to say, I never reached out to ComFood again or followed through on my story idea. But despite the scorn, I maintained my assertion.

A year later, in 2019, Psychology Today ran an article titled “Gender Fluidity and Hormone Disruptors,” outlining how certain chemicals increase gender dysphoria. Because they do. The article actually states,

“Whatever one’s opinions about such matters, it is short-sighted to ignore actual environmental threats to brain development.”

I was reminded recently of this four-year-old email exchange while listening to Matt Walsh’s commentary on a new-fangled branch of medicine dubbed “Gender-Affirming Care.”

Walsh said, “There are some major screwups on the heavenly assembly line, and somehow it’s happening a lot more over at the factory.”

Today, I would add to my toxin-induced transgender theory the poisoned nature of a sick society that has birthed the Sex Reassignment Surgery Market, projected to be worth $1.6 billion, by 2026. Consider it was a $316 million market in 2019.

In other words, Big Ag is producing Big Toxins, including atrazine, phthalates, and a slew of xenoestrogens that are compounding gender dysphoria. Next, factor in the twisted physicians, courtesy of a Rockefeller medicine mindset, who dole out puberty blockers/ chemical castration drugs, and synthetic hormones. The government and propaganda media refer to these meds as “putting a pause on puberty” because they give a person “the time and space needed to explore and settle on their gender identity.”

While doctors and patients have been roasted and reprimanded for ‘off-label’ use of hydroxychloroquine (HCQ) or ivermectin for COVID-19, gender specialists dole out these drugs by the handful, even though they have NOT been approved by the FDA. These hormones, which can cause irreversible changes including chronic acne and even infertility, are being given to kids as young as 13.

There are very few studies on what puberty blockers do to brain development. Yet Fauci’s NIAID spent $478,188 of taxpayer money to turn monkeys transgender. For real.

Researchers stated they had injected male monkeys with female hormones in order to understand why transgender women reportedly experience higher rates of HIV. But what else did they glean?

Scientists planned to evaluate how the injected hormones altered the male monkey’s immune systems to determine if feminizing hormones had an adverse effect on the strength of immune systems. Yet no conclusions are available. 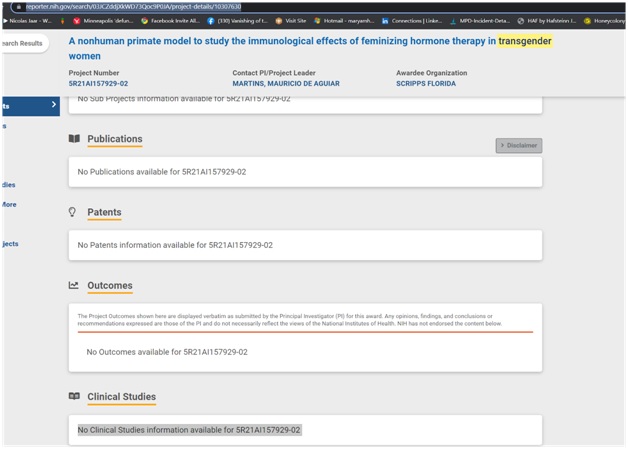 Just like they created a booming industry out of the Cult Of Corona, consider all the “gender clinics”, drugs, implants, and more that are needed to change the appearance and function of God-given body parts and to snuff out biological reality.

In fact, favorable government policies toward “gender transition surgeries” are the major factor “driving the industry demand,” according to the global market research and management consulting company, Global Market Insights. Under The Affordable Care Act, a.k.a Obamacare, health insurance is provided to transgender and gender non-conforming people for sex reassignment surgeries and other “technological advancements”.

So, is it safe to say that the government is supporting the transitioning humanity? The current trend is helping to normalize the notion that souls can find themselves in the wrong body is skyrocketing at a rate like never before? Why isn’t there an option for detoxing our environment and our body before taking on these extreme medical procedures?

The perception is that the body must be thoroughly altered to match the mind’s perception of how it ought to be. Many critics argue that there is a concerted push to muddle the sexes. This ideology and practice of disembodiment is being driven across medical, legal, cultural, and educational institutions. For instance, an excellent piece, written by reporter Jennifer Bilek, outlines how the billionaire Pritzker family has played an integral role in normalizing transgenderism or what she calls “Synthetic Sex Identities (SSI).” In 2013, around the time gender ideology entered the mainstream American culture, Jennifer Pritzker announced a transition to womanhood.

At its core, the embrace of transgenderism is not simply about societal acceptance and inclusion of people with alternative views or lifestyles, but a giant ideological redefinition of what it means to be human.