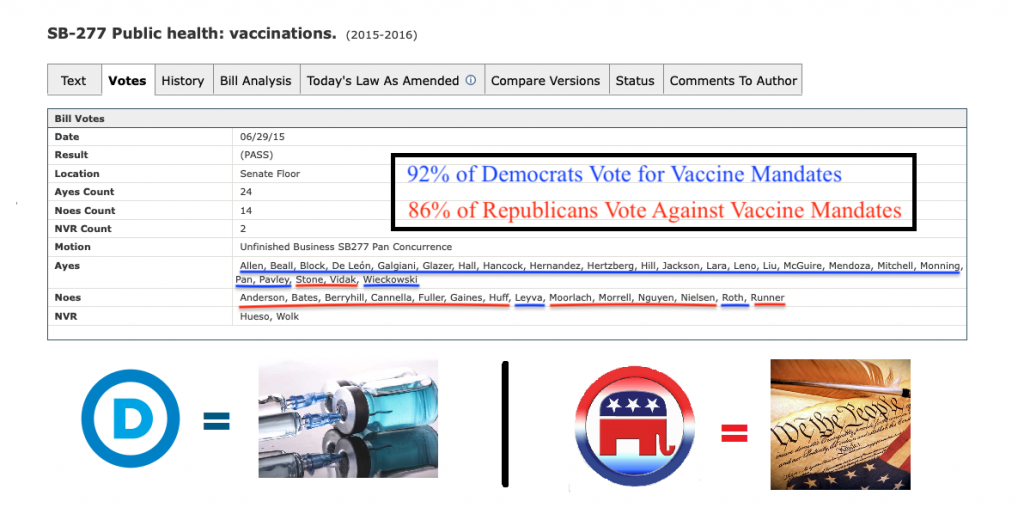 This same voting pattern has been repeated in every State, every single time, without exception. See examples here and here. Political affiliation is literally the single deciding factor today for whether Americans will be forcibly vaccinated.

BigPharma calls this voting pattern “political polarization” and they hate it because it means that as a voting block, conservatives are increasingly aware of vaccine dangers. Indeed, when you google ‘political polarization and vaccines’ you can see plainly that BigPharma and the MSM can see that vaccine mandates are becoming “politically polarized.”  For example, Neal Goldstein of Drexel University’s public health school suggests the issue of vaccine mandates “has indeed entered a hyper-partisan landscape. As a result, it may be wise to avoid legislation when possible to avoid opening more wounds.”

Translation: Big Pharma is afraid to push mandates into a “politically polarized” environment where conservatives actually have a voice.

This shouldn’t be surprising, because it follows historical trends. For example, Big Chemical has always been afraid of political progressives aligning as a voting block by the millions with the environmental movement. Same with Big Abortion and the industry that harvests aborted babies – both fear conservatives as 50%+ of the voting public.

Why do some folks in our health freedom movement agree with BigPharma’s format by calling for “political unity”? None can ignore the plain reality that vaccine mandates are “politically polarized”, with Democrats voting for mandates but Republicans & Independents voting for freedom. 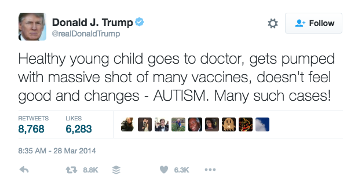 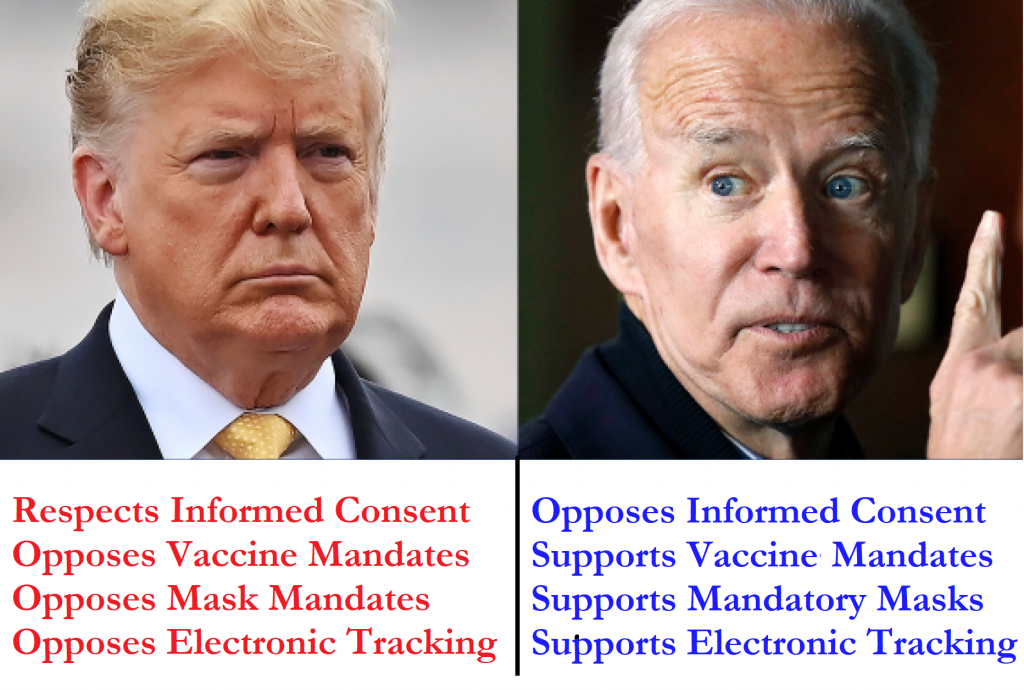 “We should be thinking about making it [the COVID vaccine] mandatory.” Biden added that he’d ask governors, mayors, and council members to encourage and mandate vaccines.”

And here are more important things to know about Trump:

“This is going to go away without a vaccine.” See here

“I don’t believe I’d ever do a mandated vaccine, because I just don’t think I would do that, where you have to have it,’ Trump told Stuart Varney on Fox Business Network’s ‘Varney & Co.’ “Because there are some people who feel strongly about the whole situation.”). See also here, and here

“if you don’t get it [the vaccine], this is going to go away at some point”… “It’s not solely vaccine based.  Other things have never had a vaccine and they go away. So I don’t want people to think this is all dependent on a vaccine.” Link.

This is part of Trump’s strategy: he gains jurisdiction over major figureheads like Gates and Fauci and WHO bosses by associating with them (or giving them funds), then he destroys their credibility in public, investigates them to gain their records, and then he changes policy (he’s doing the same thing now with Comey and FISA-gate). By contrast, if Trump just waltzed into office and started dismantling the CDC and FDA, or randomly claiming jurisdiction over Bill Gates, then Trump wouldn’t last 2 days as President. There is a proper procedure to jurisdiction, investigations and justice. 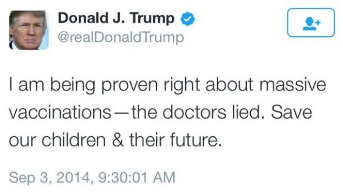 Trump says what he says about vaccines so he will be perceived as a moderate. Historically and strategically, it is the moderates who create change, even fundamental change.

Trump has never forced vaccination on anyone, so that’s good.

The most he’s done is continue U.S. federal government control and involvement over vaccine development and distribution. And that’s just how the world works — if he didn’t control it, he couldn’t change it.

Same with 5G. Trump has never forced 5G on anyone. Rather he’s set the stage for the U.S. federal government to study 5G for years to come, and to control it and change the technology. Most people correctly equate “5G” with a specific (and harmful) method of transmitting data that’s dangerous. But the reality is that wireless data transmission doesn’t need to be dangerous; we just need to change the technology, to create harmonious technology, for example, a wave propagation in harmony with Earth’s natural rhythms allowing us to reach exponential transmission. I expect that is the kind of progress Trump means when he says, “We will have 5G, 6G, and beyond!”

This is an important point that I think some folks miss: the new 5G legislation empowers Trump to require changes to 5G technology. It put all the power into the hands of Trump (who stopped 5G rollouts) rather than into the hands of industry (who was pushing for 5G rollouts). In short, we now need Trump’s approval in order to get something done.

Like with many things in life, knowing who controls something powerful can be more important than the laws governing that powerful thing.

If the U.S. didn’t control 5G, it would be controlled by China that treats its citizens like cattle. Then to solve the problem the good guys would need to infiltrate China, and war.

If the U.S. didn’t control GMOs, they would be controlled by some other nation through patents. Then to solve the problem the good guys would need to infiltrate those other nations, and war.

Technologies such as 5G, GMO, and Artificial Intelligence, are basically inevitable. The only question is who is going to control technologies and set checks and balances for technologies. Is there any other Nation with a better record of checks and balances than the USA, especially before the love of money corrupted so many into becoming corporatists and statists? I can’t fault Trump for positioning the US to control technology. Is there any other nation on earth with the consumer advocacy resources and ingrained freedom ideology to literally steward the world into a humane technological future, and also a Nation with the military might to actually enforce its decisions for those checks and balances?

Democrats tend to think politicians & bureaucrats will clean the earth with their regulations (even though these regulators have presided over and approved the worst pollution in human history, and now claim the greatest threat to humanity is not pollution in its thousands of forms but rather carbon), whereas Republicans are more likely to recognize the reality that engineers produce root solutions transcending political issues and not requiring bureaucracy to sustain.  Incidentally, Trump says he is an environmentalist, and his record shows nature conservation. See here and here.  So I’m optimistic for the bright future of environmental engineering in the USA.

A Message to Every Democrat in the Health Freedom Community

Given the statistical fact that the Democratic Party is the #1 opponent of health freedom who is literally trying to forcefully vaccinate and track us electronically, why not announce that simple truth openly, and announce that you’re really an Independent? Why not #WalkAway?

Relatedly, I also don’t understand the whole ‘unity at all costs’ thing? Don’t get me wrong, I’m a Californian so I love kumbayah sentiments, but does ‘unity at all costs’ even work in reality to create change? When you study this phrase “political polarization”, you can find countless examples where ‘unity at all costs’ is a failed strategy because it does not create change. For example, if you want to stop liberals from killing babies (abortion), it is a proven effective strategy to withdraw support from the political wing that supports killing babies. Trying to convince liberals to stop baby killing is like trying to convince Merck to stop manufacturing the MMR; not gonna happen.  Merck is all in with the MMR.  Planned Parenthood is all in with abortions.  The Democratic Party is all in with vaccines.

This should make sense to liberals. They can no more convince conservatives to support repealing the 2nd Amendment than they could convince Christians to accept forced microchipping. Sure, you might get a few confused takers here and there, but is it wise or even hopeful to plant good seeds in the desert?

That is why the health freedom movement should focus its efforts and sowing seeds within the fertile field of conservativism, where patriots are actively open to waking up by the untold millions, and waking up immediately.

Independents all across America are flocking to health freedom primarily because they are realizing that mandatory vaccination and electronic tracking have become the official policies of BigPharma and BigTech and the Democratic Party.

One last point: Compare conservative news to liberal news and observe how they report entirely differently.  For example, when a UN Official claimed that governments because of coronavirus “may have to enter homes and remove family members”, Tucker Carlson, a conservative broadcast host with FoxNews, correctly exposed the UN as tyrannical and out of touch with American families. Link.

By contrast, Rachel Maddow, the liberal broadcast host with MSNBC, praised the UN for their forward-thinking approaches and cited a NY Times health reporter on the ‘virtues’ of government forcefully separating family members in their own homes for their own good. Link.

No more excuses. #WalkAway and unite with the health freedom community.

Greg Glaser is a conservative and health freedom lawyer in California.