South Florida has a bit of a python problem, to say the least. Pythons have spread at an astounding rate throughout South Florida and have been linked to a variety of disruptions to the Everglades ecosystem. Pythons are said to have got their roots into the Everglades via exotic pet owners that likely released the snakes when they got too big to handle. Pythons being the new top to the food chain has created a variety of problems.

The South Florida Water Management District has an elimination program, as well, South Florida commonly opens up hunting season on the snakes. The problem, however, is that Pythons are stealth beings and difficult to track down.

But are they edible?

Kind of. Maybe if you are looking for survival food in case you ever have to grab your bug out gear and hit the road and you wind up hungry in the Everglades?

Chef Gordon Ramsey set out to discover exactly what Python taste like for an upcoming show called “The F Word,” which will air on FOX. But what about the risks involved with consuming pythons? Oh, just wait for it… 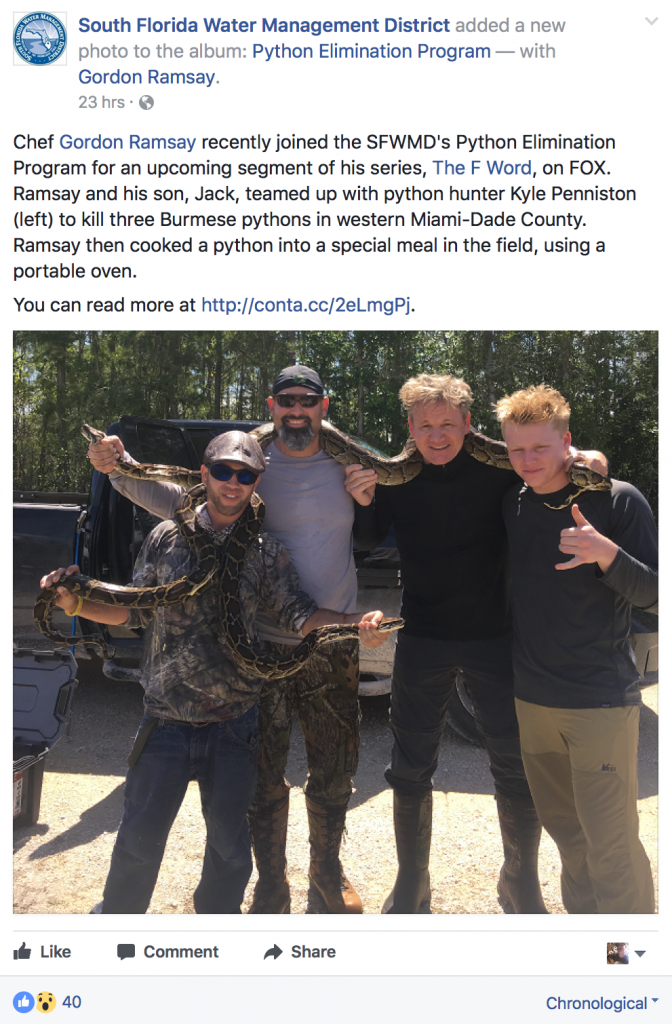 Some of you avid prepper news folks might consider that slaying a Python might be kind of dangerous, right? I mean, not only can a Python strangle a cow, but you also have to worry about all the other Everglades creators looking to make your life miserable. But instead, the real danger, according to Florida officials, is that Pythons contain mercury. Yep, the danger is that they contain a dangerous chemical.

According to the Miami Herald.

Never mind that Everglades pythons have mercury levels measured at more than three times the levels considered safe for fish and officials have urged the public not to consume them. This is a chef whose fiery temper and scathing attacks on his cooking show contestants have built a reality show empire. What’s a little mercury poisoning?

Robert F. Kennedy Jr. proposed we avoid mercury, also, but he did not receive the same acceptance that Florida officials did when they warned the public away from eating Pythons.