When explored for in vivo applications in animals, graphene oxide, which passes through the blood-brain barrier, induces cell apoptosis and lung granuloma formation and can cause liver and kidney damage. Carbon nanotubes were suggested to display “asbestos-like” pathogenicity in an animal model in the sense that long and rigid, but not short or tangled, carbon nanotubes elicited granuloma (small area of inflammation) following intraperitoneal injection in mice.

Granulomas frequently occur in the lungs but can occur in other parts of the body and head as well. They seem to be a defense mechanism that triggers the body to “wall off” foreign invaders such as bacteria or fungi to keep them from spreading.

Graphene oxide (GO) is a toxin that triggers thrombi and blood coagulation. It also has an impact on the immune system. Graphene oxide accumulated in the lungs can have devastating impacts.

Interestingly, GO amplifies the phytotoxicity of arsenic in wheat. Isn’t this convenient when you consider the prevalence of heavy metals in our environment? These results all indicate toxic amplification of toxins or pollutants by nanomaterials. Herein, this phenomenon is defined as ‘‘indirect’’ nanotoxicity.

Reports also stated that GO is being added to the water supply and in meat.

According to a paper in Nature, “In addition to the amplification of uptake, ‘‘indirect’’ nanotoxicity can involve multiple phenomena, such as toxic amplification of coexistent toxicants via the “regulation of transformation, metabolism, genes, proteins, and enzymes. Arsenic is a ubiquitous toxic element and shows the potential to pose a great risk to animal and human health.”

A paper titled Nanotoxicity of Graphene and Graphene Oxide states that “more detailed studies are needed that aim to investigate the toxicity of graphene-based materials to properly associate the biological phenomenon with their chemical, structural, and morphological variations that result from several synthetic and processing possibilities.”

The notion that the FDA (or any regulatory agent) legitimately permits the inclusion of this known poison for mass consumption is absolutely absurd.

Graphene oxide can also induce in vitro and in vivo mutagenesis, “thus extra consideration is required for its biomedical applications.” Mutagenesis is a process by which the genetic information of an organism is changed by the production of a mutation. NICE!

Results showed that GO interfered with DNA replication and induced mutagenesis at the molecular level. GO begins to show toxicity against erythrocytes, fibroblasts, and PC12 cells. It can induce cell apoptosis, hemolysis, and oxidative stress.

Surface chemical modification, such as PEGylation, improves the biocompatibility of GO. However, the chemical bonds linking GO with modified polymers can be broken down in vivo, thus surface-modified GO can also induce in vivo toxicity.

But now, sick spin doctors who worship scientism have repositioned graphene as being good for you. That is the name of the game with pharmaceia, which means sorcery in Greek. Take, for instance, Patrick Franz, the founder, and chief executive of materials group PlanarTECH. He sees graphene as a potentially useful tool in the fight against Coronavirus.

In March 2020, he said the conclusion is that graphene oxide may offer a platform to fight a variety of viral infections (such as the SARS-CoV-2 coronavirus), possibly in the form of a coating.”

However, when this toxic substance gets into the human body, it can create thromboses, causes blood clots, disrupts the immune system, can trigger a cytokine storm, can instigate pneumonia, create a metallic taste in the mouth, causes inflammation of the mucous membranes, produces a loss in the sense of taste and smell, is magnetic (especially at the injection site), and blocks detoxification in the body by blocking glutathione.

Interesting that many of the symptoms seem to mirror that of COVID-19.

Dosage tests on graphene oxide and its effects on human cells were conducted. Specifically, to see how much graphene oxide they can put in a human body before it becomes toxic. The chart of measurement used shows three tiers: an antioxidant reaction, an inflammatory reaction, and a cytotoxicity reaction. 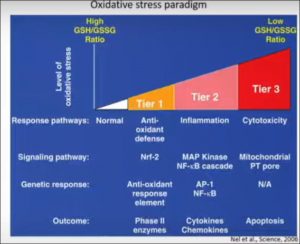 Now that we’ve established that graphene oxide is poisonous, let’s examine why they would inject this toxic ‘wonder material’ into the human body. For one, it’s a great conductor of electricity and it can host a magnetic field. Can it be activated by frequencies and literally connect you to the internet of things?

Graphene oxide is highly conductive and has a direct effect on human neurons. In the future, will humans be controlled from the outside with a magnetic field apparatus?

A paper titled Human-Like Sensing and Reflexes of Graphene-Based Films establishes that “high carrier mobility and low sheet resistance ensure graphene a rapid transmission of electrical signals, and thus enable it to be a promising material for its human-like applications.” 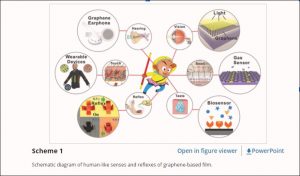 Back in June 2016, the paper published stated:

“Humans have numerous senses, wherein vision, hearing, smell, taste, and touch are considered as the five conventionally acknowledged senses. Triggered by light, sound, or other physical simulations, the sensory organs of the human body are excited, leading to the transformation of the afferent energy into neural activity. Converting signals into electrical ones, the graphene-based film shows its inherent advantages in responding to tiny stimulations.

“Various human-like senses of graphene-based film and their recent advancements are then summarized, including light-sensitive devices, acoustic devices, gas sensors, biomolecules, and wearable devices. Similar to the reflex action of humans, the graphene-based film also exhibits reflex when under thermal radiation and light actuation.

Keep in mind also that the “neurons in the human nervous system have special structures, allowing them to send signals precisely & rapidly to other cells. To utilize the graphene film in human-like sense devices, the promotion of conductivity similar to electrical signal transmission is crucial.”

“At last, the future opportunities lie in the new applicable human-like senses and the integration of multiple senses that can raise a revolution in bionic devices.”

They added however that “although the conductivity of graphene, in theory, gives it a promising future, the reality does NOT match the theory due to various factors caused by the defects and cracks from the synthesis and post-treatment process.” 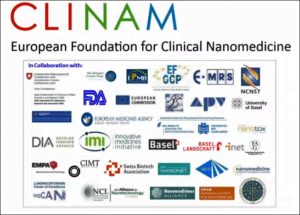 According to a study from 2007, “Nanoparticles offer many new interesting developments in biomedicine and technology, for example in diagnostics, treatment and novel functional materials. These particles are small enough to enter almost all areas of the body, including cells and organelles, leading potentially to a new approach to medicine (NanoMedicine).”

Incidentally, in 2017, in a study out of Italy, looking at adjuvants, they found that 44 types of 15 traditional vaccines — manufactured by leading global companies– contained a very troubling and previously unreported fact:

The vaccines were “heavily contaminated with a variety of nanoparticles.”

GFNs reach various locations through blood circulation or biological barriers after entering the body, which results in varying degrees of retention in different organs. Due to their nanosize, GFNs can reach deeper organs by passing through the normal physiological barriers, such as the blood-air barrier, blood-testis barrier, blood-brain barrier, and blood-placental barrier.

In a biological fluid, proteins are associated with nanoparticles, and the amount and presentation of the proteins on the surface of the particles leads to an in vivo response.

For example, some graphene nanomaterial aerosols can be inhaled and substantial deposition in the respiratory tract can occur. They can easily penetrate through the tracheobronchial airways and then transit down to the lower lung airways, resulting in the subsequent formation of granulomas, lung fibrosis, and adverse health effects on exposed persons.

“In these mechanisms, (toll-like receptors-) TLR-, transforming growth factor ?- (TGF-?-) and tumor necrosis factor-alpha (TNF-?) dependent-pathways are involved in the signaling pathway network, and oxidative stress plays a crucial role in these pathways.”

Recall that we mentioned targeting TLR in regards to messing with our innate immune system.

As an aside, I found a study that states that “proteins compete for the nanoparticle “surface,” leading to a protein “corona” that largely defines the biological identity of the particle.” Is this just a coincidence that the protein is called ‘corona’? Yes – crown-like spikes surround the coronavirus species.

The cell receptors and other surface proteins on a cell stick out from the surface in order to interact with other chemicals or cells. All cells look studded or sun-like – corona-shaped – but a larger cell would have more variety of surface proteins than the one main type found on a coronavirus. The coronavirus group was given the name because they all have the corona of spikes, which is the method they use to enter cells.

Coming Soon:  Stay tuned for the final excerpt, Part 10 for additional insight into graphene, nanotechnology and the Covid-19  experimental injections.

Like what you’re reading on The Tenpenny Report?
Share this article with your friends. Help us grow.

Maryam Henein is an investigative journalist, and founder, and editor-in-chief of the health magazine and marketplace HoneyColony. She is also a functional medicine consultant/coach, and the director of the award-winning documentary film Vanishing of the Bees, narrated by Elliot Page. Follow her on Gab: @ladybee. Email her: maryam@honeycolony.com.

Be the first to comment on "Part 9: A Primer: Understanding The Mechanisms Of The Experimental Genetic Technology Referred to As COVID-19 ” Vaccines”"