The war to silence vaccine injuries came to a head on a leafy autumn Saturday in a Harlem church overlooking the Hudson River. I witnessed the display first hand when I attended the three-hour event, “The Harlem Children’s Health Forum” on October 19, 2019. The event had been set up weeks before with Reverend Al Sharpton scheduled as one of the keynote speakers. But the firebrand reverend, the enforcer of rights for the African-American community, abruptly dropped out of the forum two days before putting the event and its location in doubt.

The forum’s host and producer, Curtis Cost, author of the 2010 book “Vaccines Are Dangerous,” continued to negotiate with the church on Friday, narrowing its scope from a four-and-a-half-hour event down to three hours.

Clearly, Big Pharma and its proxies moved swiftly to subvert and prevent the forum from taking place. No doubt, chasing Sharpton away from defending his own community was no small victory for Big Pharma and the bought politicians of New York City.

One of their proxies, Dr. Peter Hotez, has refused to debate RFK Jr. but has never refused to take millions in research money from the vaccine manufacturers, launched into a Twitter war with Robert F. Kennedy, Jr.’s non-profit Children Health Defense the week before the scheduled event. Hotez attacked the event and its location—Harlem, New York—in the most obscene way.

And debate what? It’s like debating whether or not smoking causes cancer. Or whether seat belts are safe. There’s nothing to debate. There’s only #Science vs a band of miscreants who monetize the internet, sell fake books, phony autism cures, or those just desperate for relevancy

Has also said in a separate tweet: “I don’t engage in ‘calling people names’, but I’ve asked you halt the predatory targeting of vulnerable populations, Somali Immigrants (sic) in 2017, Orthodox Jews in 2019, and now African-Americans in 2020 (sic). So far: 71 hospitalized, 18 in the ICU. Just please stop.”

Let’s take a look at how Professor Hotez defines a “vulnerable population.”

“… the children of Minneapolis’s Somalis suffer the highest known rate of severe autism in the world—one in 32, according to University of Minnesota researchers.”

The strange (not really) part about Dr. Hotez’s statement of “predatory protection” boils down to the untested, unsafe vaccines and its bloated schedule that he’s fully aware of the academic research and the high autism rate in Minnesota.

In April 2019, it was Big Pharma through its bought New York politicians, rolled out a predacious scheme targeting the Orthodox Jewish populations in Brooklyn and Rockland, County, NY, then moved to remove religious exemptions on vaccines statewide. They chose the month of April to launch their legal and media-driven attacks.

April 2019 had both the Jewish holiday of Passover and ‘Autism Awareness Month.’ The attack was a two-for-one assault. When Passover concluded, Brooklyn’s Rabbi Hillel W. Handler aired his opinion on the false measles outbreak used to batter religious rights.

A week later, the orthodox rabbi wrote an open letter to New York City Mayor Bill de Blasio —“the worst mayor in the city’s history,” according to the New York Post—titled, “Stop the Vicious Progrom in Williamsburg Now! Your ‘Measles Emergency’ is a Huge Hoax.”

“Mr. Mayor: You are guilty of a despicable ‘Hate Crime,’ demonizing helpless Hasidic Jews in New York City with your fake ‘Measles Emergency.’ You are putting the lives and the safety of all Hasidim at risk. Didn’t you learn anything from the massacre of the Chabad Hasidim in Poway, California? Already, just this weekend, there was an unprovoked attack on Hasidim in Williamsburg by a gang of thugs, yelling ‘You ### Jew!”

So, Dr. Hotez, who is targeting which “vulnerable population?”

For five years, Peter Hotez has been fully aware of the CDC’s corruption of data, science, and the truth. He knows about the CDC whistleblower Dr. William Thompson, who recounted the corruption in his epidemiology study masking the fact that African-Americans male infants were 340% more likely to get autism from the MMR vaccine than boys from other populations. (1) (2) (3) Strike three, you’re out, Hotez!

The forum, held at historic Riverside Church, Children Health Defense’s General Counsel, Mary Holland, put the day into perspective. She reminded the audience of the many civil rights titans who spoke in the church, from Reverend Martin Luther King, Jr.’s, 1967 “Beyond Vietnam” to Archbishop Desmond Tutu speech in 1988.

Human rights have long been embraced by the Harlem community and Columbia University in the area.

Pediatrician, Dr. Lawrence Palevsky, spoke next. In a calm, confident voice he made the analogy: If the Big Vaccine monopoly was the car industry, people would be forced to buy vehicles, no matter how unsafe, untested, or defective. In light of what Rabbi Handler stated as New York State’s authoritarian overreach, Palevsky warned the audience: “If you are concerned about the state you live in (regarding vaccines), leave.”

Five mothers followed; two too many. Both admitted they hadn’t spoken publicly before, and it showed. They rambled on, didn’t set up their issues well, and did not close effectively. Unfortunately, this robbed keynote anchor Robert F. Kennedy, Jr., of valuable speaking time. And the packed, standing room only auditorium with scores of mothers bringing their vaccine-free and vaccine-injured children in tow, missed out when the speech ended abruptly.

One of the five mothers, Sheila Ealey, the star of the movie Vaxxed and donator of the Vaxxed bus, told a heartbreak story about her vaccine-injured son, Temple, who received his twin sister’s MMR shot plus his own shot when he was one year old. He became severely brain damaged and autistic overnight.

Ms. Ealey pounded away that one segment of the U.S. population – her fellow African-Americans – have never had it “well” in this country. She admonished that the intrusion of vaccines into the lives of all Americans has gone too far against human rights. She closed by paraphrasing Russian mass murderer Josef Stalin’s famous quote:

“America is like a healthy body and its resistance is threefold: its patriotism, its morality, and its spiritual life. If we can undermine these three areas, America will collapse from within.”

Raising her hands as if finishing a sermon, Ealey shouted in a deep voice: “We must fight the enemy within (the United States). It’s not China. It’s not Russia. It’s Big Pharma.”

Reverend Dr. Phil Valentine followed the mothers and talked about the “corporation of the United States of America.” After outlining that the healthiest kids are the unvaccinated, he explained how this legal trap has stripped Americans of their common law rights. He laid out how the financial oligarchs out of London have put the country in a straitjacket of massive debt and how both the Nuremberg Code of human rights and “informed consent” have been eviscerated by corrupt agents in power.

By the time Robert F. Kennedy, Jr., stepped up to the podium it was 3:40 pm. A fifteen-minute break, combined with too many speakers, had robbed him of his time to speak, the information that the people of Harlem and elsewhere had come to hear.

As he was explaining how he transformed from an environmental activist to health advocacy and vaccines, Curtis Cost slipped Kennedy a sheet of paper. RFK read the note aloud: “One minute! I have one minute left to speak?”

As confusion and a furious discussion set in, the church’s (micro-) manager came forward and told them the forum was over and that they had to leave. People booed and shouted. Kennedy tried to negotiate, stating he would pay the church for the extra time.

The very rude and diminutive church manager stridently refused the offer. Kennedy picked up the mic to address the audience, but then the church cut the power to the audio system. 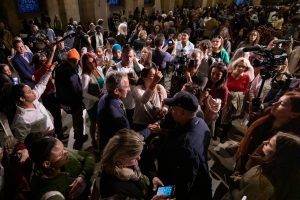 The loud church manager shouted for everyone to get out now, declaring how the crowded hall was suddenly a fire hazard. She then called the police, which sent one SUV to the front of the church on Riverside Drive to clear the hall.

The obviously Pharma-forced eviction from the church empowered Kennedy to finish his speech on the streets of Harlem, a move that would have made MLK proud.

At that point, half of the crowd poured out the rear door of the church onto Claremont Avenue, near 120th Street, to find Robert F. Kennedy, Jr., standing on a chair. He smiled to the crowd and picked up where he had left off.

For the next twenty minutes, RFK Jr. riveted the church audience. The guerilla-marketing atmosphere attracted local residents, passersby, and motorists who pulled over, rolled down their windows, and listened to what he had to say.

In the end, with passion and vigor, he said: “All we have left to fight them (Big Pharma corruption) with will be in the courts and on the street.”

The people shouted and cheered.

At that moment, this author recalled U2’s 1987 hit video—“Streets Have No Name”—filmed without a permit to a ruckus crowd at an intersection in downtown Los Angeles. Sure, the crowd was smaller in Harlem, without the Irish rock band.

But the fire and passion in RFK Jr. were greater than the smash hit. He finished with a promise. He said that despite the government selling out the legal rights of its citizens to sue pharma giants for unsafe and defective vaccines, that he will sue them under the narrow window of “fraud and lies.”

Just as those last two words sprung from Kennedy’s mouth, all who were there looked up to see a flat, horizontal but arching rainbow appear in a cloud over the church. It was perfectly timed and represented hope. A rainbow on a rainless day energized the crowd who cheered the game plan, knowing it would be a long difficult road to a future victory.

Take the fight to the “courts and the street,” Kennedy said. A fitting mission statement to close a fluid day.

James Grundvig has written and published as a freelance journalist and columnist, covering subjects from autism, its cause and treatments, clean technology, green energy, and the BP Oil Spill, to business and Wall Street, and completed investigative reports on a wide range of topics since 2005. He is the founder of the cloud-based software startup in 2011 to integrate supply chain logistics in the Construction IT space. He has 25 years of consulting engineering and construction management experience on projects of scale and complexity in the New York City area. He is the author of Master Manipulator: The Explosive True Story of Fraud, Embezzlement and the Government Betrayal at the CDC.

Be the first to comment on "RFK Jr Kicked out of Church: Vaccine Censorship Rolls on"